Core Graphics - Something should be in mind

Core Graphics is a really low-level framework in iOS which requires more graphics background knowledge to perform drawing fluently. Because of many built-in functions and options, it is hard to catch and understand all of them. This post attempts to provide some common functions/options for very new Core Graphics Hackers.

iOS provides two primary ways for drawing: Core Graphics and Open GL. However, there are more API types of these frameworks. It is simple for OpenGL when it has some clear API named OpenGL ES, Cocos2d. For Core Graphics framework, it may lead junior developer to a confused: Quartz, Quartz 2D or QuartzCore. Firstly, Quartz is heart of CoreGraphics, someone likes to refer Core Graphics as Quartz. Secondly, Quartz 2D is a part of Core Graphics, can refer as an API. Finally, QuartzCore (also known as Core Animation) is for animation, image processing and video image manipulation. It extends some function from Quartz (Core Graphics) but not a part of Quartz. In additional, iOS also provides us UIKit which contains some high-level implementation of Core Graphics, ex. UIBezierPath is high-level implementation of CGPathRef.

Some terms we should familliar with at the first glance are Drawing Context, CTM (Current Transformation Matrix), Core Graphics Coordinate.

However, the above line code just need to be written when we draw using CoreGraphics framework. For UIKit with UIBezierPath, this framework gets current context for us automatically.

Current context is needed to pass to some Core Graphics function to perform painting actions.

In context, it has some significant properties. The most important property is CTM (which will discuss more below). We can get the CTM of current context by:

CTM (and Affine Transformation) has 6 parameters: a, b, c, d, tx and ty at positions as below:

a, b is for translation

tx, ty is for scale

Core Graphics provides a functions and some options to configure the next drawing action is fore-font or back-front in current context.

Blend Options may be:

Note: For two above images, desired color of underline is blue. The first image shows right color but the second does not. 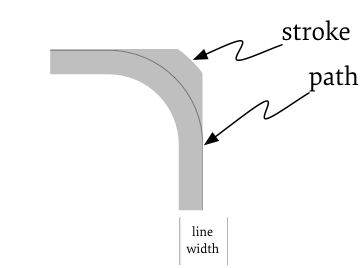 blog comments powered by Disqus
PLEASE, BUY ME A BREAD!